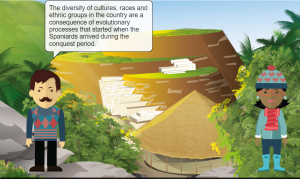 Do you know which patterns that made possible the evolution of races and ethnic groups in Colombia?

You will discover the answer to this and many other questions in this Learning Object, which explores relevant aspects about the evolution of living beings.

Tweets by @@peguiedu
Recognition of certain events in the history of Integral Calculus – Matemáticas...

How do living creatures settle and interact inside an ecosystem- Biología ...
Desplazarse hacia arriba