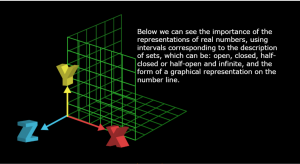 Using the animation, the teacher will present the historical processes that contributed to creating real numbers (from the Egyptian time until the theories that formed the concept of real numbers proposed during the XVIII century). On the other hand, we show the importance of representing real numbers using intervals that describe the sets, which may be: open, closed, halfclosed or half-open and infinite, as well as the graphical representation of the number line. Some real numbers cannot only be placed on the number line, but can also be represented geometrically using a ruler and a compass by forming triangles and rectangles (this allows to see the real dimensions of certain numbers which are hard to measure). Finally, the addition and multiplication properties of real numbers are formalized, presenting different methods and tools to work with the set of real numbers.

Tweets by @@peguiedu
How do species change over time – Biología 9º