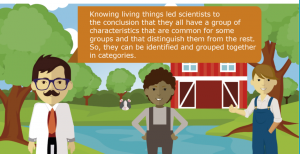 Planet Earth has special characteristics that allow the survival of numerous and diverse living things. Since time immemorial, humans (homo sapiens) have given names to the resources around them, including biological species, probably due to the need of distinguishing dangerous predators, recognizing edible species, selecting raw materials to make goods, etc. This nomenclature is local, since a living thing can receive different names depending on the population.

For example, the opossum is known as zarigüeya, fara, chuca or rabipelao in Spanish. These names vary from one country or region to another. Knowing living things led scientists to the conclusion that they all have a series of characteristics common for some groups that distinguish them from the rest. So, they can be identified and grouped together in categories.

Tweets by @@peguiedu
Understanding the concept of function – Matemáticas 10°

Use of trigonometric identities to rewrite or simplify an expression –...
Desplazarse hacia arriba